Boris and Nastya wanted to buy a one-room apartment in the Moscow region, but they realized that it would be much cheaper to build their own house. And the guys were not mistaken: they got a cozy barnhouse with a spacious kitchen-living room, a comfortable bedroom and a large bathroom. Useful experience, an honest story about the pros and cons of country life – our heroes will share all this with you. Get inspired and take on cool ideas.

About construction and decoration

The house is made in the style of a barnhouse – it originates from classic barns. We built housing on a turnkey basis: it was built from scratch in 16 days. Rapid erection is possible thanks to frame technology – any house from 70 to 100 m² can be built in 2-4 weeks, and with finishing. You just have to move in and live.
On the floor – untreated pine, developers could be asked to varnish, but we refused. The walls are larch, it is extended to the veranda. A huge plus of the frame structure is that you can put a window of almost any size, make a part of it blind or completely made of glass. Double glazed windows are in a wooden frame and do not spoil the view, the heat does not escape.

About the kitchen-living room

We get into a compact direct kitchen with an island from the hallway. The island serves as a dining area: there are two places to sit. Due to the island, we not only increased the space for cooking, but also saved space so as not to put additional tables, not to pile up chairs. The island also serves as a storage: it contains dishes, oils, small household appliances – a very functional and convenient solution that replaces a classic table.
The wall in the kitchen is not load-bearing: it was impossible to hang large heavy boxes on it. We installed the lightest drawers – they are functional for our small family, we even thought of a hood. We made leather handles: inspired by the idea from Pinterest, it looks cool, but in fact it is also very practical.
Boris made the apron himself: he didn’t want to install glass. To choose the glue for the tiles that will be glued to the tree, a friend involved in the construction of restaurants helped. But we made a mistake: the house is wooden, it breathes, small cracks appeared on the grout between the tiles. If we glued the tiles on a thin sheet of wood or drywall, it would be more aesthetically pleasing.
The tabletop is made of laminate: they abandoned the array, because they didn’t want to constantly wipe it and refinish it. The panel is two-cooker, but we have enough space. The issue of lighting was acute: there was not enough backlight from the hood, so we decided to make a touch diode backlight for the working area itself.

The second light in the living area (tracking lights) is what we bought this house for. If the LED burns out, the whole block is changed. There are also huge windows up to the ceiling. It takes about 2.5-3 hours, two people and a five-meter ladder to wash them. The white block on the wall is flow ventilation. Two buildings are located in the living room and in our bedroom.
We combined thin curtains with blackout curtains: Nastya’s mother sewed them. In the main recreation area there is an almost three-meter sofa with a table. There is also a projector that connects to a laptop – we display the image on a white wall. We also have a collection of cars, for which a special “garage” was thought out – it was made by a master from St. Petersburg.

On the way to the bedroom there is a large panoramic window. It is important that this place can be the entrance to another block – at any time you can attach another structure with a beautifully designed terrace.
The bedroom is our most popular place. It is very small (6 m²), contains a bed 160 x 200 cm, a log table, necessary things and a small chest of drawers.
Under the bed are two drawers on wheels for additional storage. Also in the bedroom there is a small folding window with a blackout curtain – a design with hooks was invented and made by ourselves.

About the second floor

A staircase leads to the second floor: a water pipe serves as a railing. Due to the fact that there are a lot of things, but there is no pantry, most of the things are located here. There is a storage system for clothes and Boris’ workplace. There is a small but comfortable table by the window. Sometimes there is a clothes dryer on the second floor.
The lamp turns on here, but on the first floor there is a backup switch that can be used to turn it off. Someday this room will become a chill-zone with a sofa that can even be used as a guest bedroom.
An important thing on the second floor is the railing that provides security. And from here you have a magnificent view! 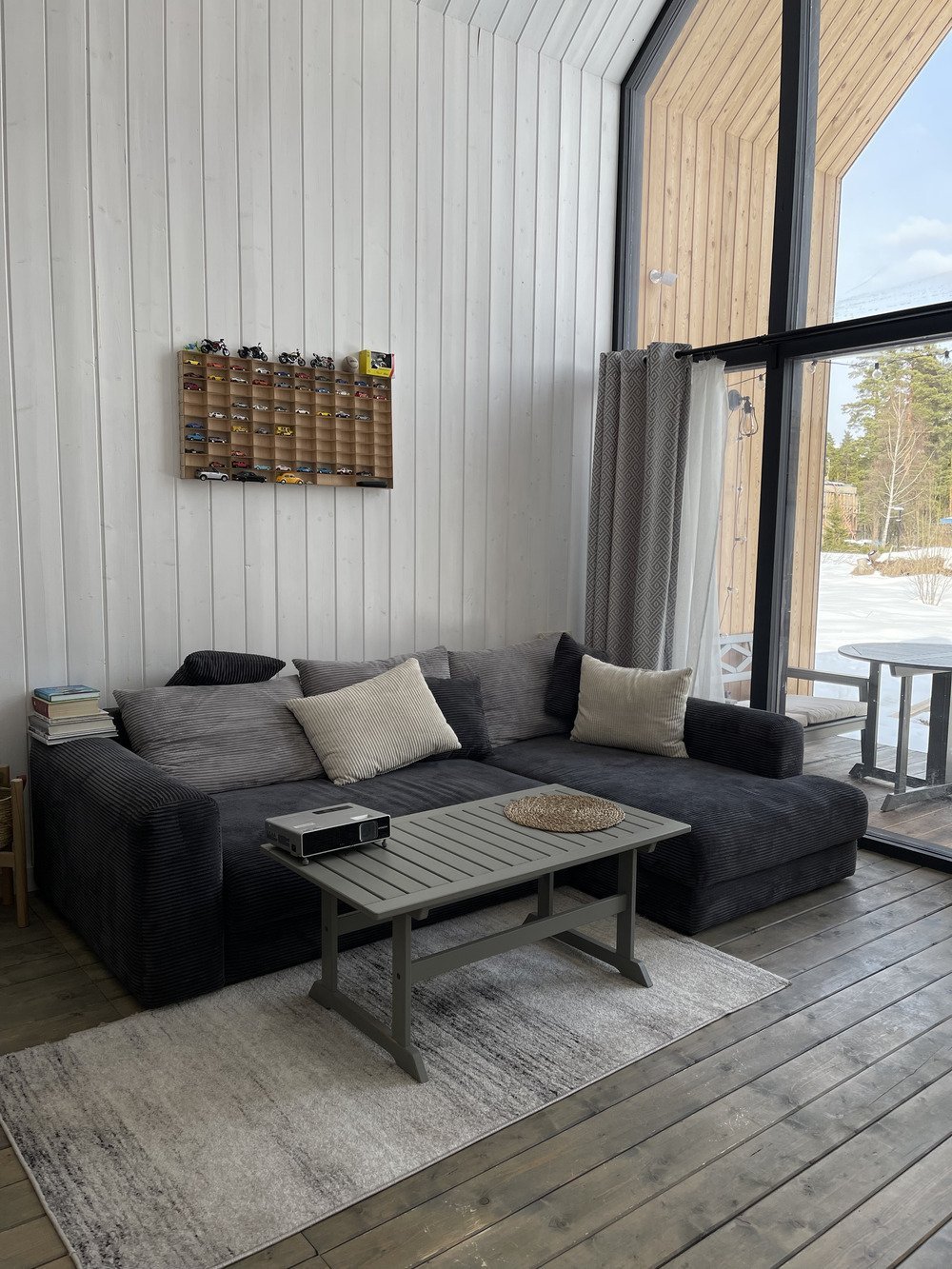 Most of what you see here was included in the basic equipment of the house – a boiler, plumbing, bath, toilet, faucets. From what we added – a mirror and a small ugliness – a water softener. His purchase was impulsive, ill-conceived: first we had to install filters, and then him. The balloon looks ugly, in most country houses such structures are in special rooms.
The balloon will have to be cleaned – the water in the village is good, but not that good. Nearby is a tank for salt, which cleans the cylinder: it looks like a garbage dump, it looks unattractive, but so far so. A small infrared heater maintains the temperature in the bathroom.
A standard-sized washing machine was not included in the basic equipment of the house – it was selected for the finished countertop. There is also an extractor hood mounted on the wall.

The entrance hall is small – only 2.5 m². Under the sharp stairs there is a hanger, on which absolutely all of our things (spring, autumn, winter jackets, pants, bags).
All shoes are hidden under the ottoman. There is a shelf on the wall where hats are stored. We also provided hooks, a separate one is allocated for dog leashes.

Visually, the veranda is a continuation of the house – it is also larch, vertical masonry. Here is the breakfast area in warm weather. When the sky is clear outside, you can admire the stars. Enough space for five people to have breakfast comfortably. Three meters from the barbecue to the place of eating is very practical.
Under the house itself are hidden the necessary things that any summer resident needs – shovels, pitchforks, tool boxes.